Mark Fillipowich has a great piece from July about how the game camera is used to abstract the context of narrativized spaces. One of the important implications he makes is that games not only recontextualize spaces through the perception of characters, these spaces become new, abstracted representations that reflect larger perceptions and ideas.


"Regardless of whether the player-character is actually a character or merely a window into the world, a player’s control of vision frames the world and informs the player what they are supposed to take from it. What the player is able to see and the lens they use to explore the world reshape the player’s objectives, their sympathies and so on."

In literature and art it's pretty clear that what is described or portrayed is being filtered through some kind of lens, but it seems less obvious that what we see in videogames is rarely representative of what is actually there. Games can create places with such detail, but that doesn't mean that the character we play, or the author themself isn't betraying our senses by omitting, emphazizing, and rearranging parts of that setting. So this idea that Mark puts up, similar to Lana's writing on Geography and Ideology, and Stephen Beirne piece's on Fatal Frame, is important because it gives us space to think about the ways that games and settings move between abstraction and representation, and how abstraction communicates larger ideas and perspectives about those settings.

One section of art worth looking at is Expressionist Art, a umbrella category that's very much interested in these ideas. Early 20th Century German Expressionism was even more focused towards the spaces and limits of abstration and representative settings.

The first painting that I think is relevant is Ernst Ludwig Kirchner's Potsdamer Platz (above), finished in 1914 after Kirchner and the Brücke painters moved from Dresden to Berlin. Platz, a representation of pre-war Berlin, has these dead, dreary colours. A sickly green, pale yellow skin tones and a lot of dirty white on the buildings; an ivory with scribbled strokes of black and gray. The people themselves are very snakish, with long legs and black pupils. And the streets themselves are very angular and sharp, with narrowing roads and pointed street corners. So its clear that Kirchner saw Berlin as very dirty, hostile, and unwelcoming, and the people as skeeving and untrustworthy. He even expresses the typical anxiety around sex workers, who serve as the main subject of this work.


Ludwig Meidner also made paintings of the city. The flashing sparks and colours make Apocalyptic City deceptively festive, but a closer look will show that Meidner's portrait of Berlin leans more towards chaos than it does celebration. The fiery, explosive shapes and colours seem to imply a city that is literally burning, and the giant ray of blue light probably reflects Meidner's "intense involvement"(1) with religious prophecies of Doom and apocalypse, a reference to some higher, all seeing power. His arrangement of buildings present Berlin as a fractured and broken city, lacking any order or coherence.

We that this isn't what Berlin actually looks like, but Postdamer Platz and Apocalyptic City tell us a lot about the issues that could have been facing the city at that time, and the artists' perspectives on those issues.

As I was playing Sonic Adventure 2's Night City levels for the 800th time, I was compelled to look back at Apocalyptic City. If you pay attention to Sonic Lore (there's no reason why you should do this), you'd know that Sonic Adventure 2 takes place in a city called Central City, a sort of sister city to Station Square from Sonic Adventure. Certain stages, like Radical Highway and Mission Street depict certain areas at nighttime.

Mission Street is mainly characterized by crumbling roads and infrastructure. The main challenge of getting through Mission Street is avoiding gaps in the road, as parts of roads gnaw into each other, and pieces fall apart when you walk over them. Standing in a place for too long can have you fall along with them. In the final section of the stage, a giant piece of highway drops right on top of you, meters before the goal post. And Radical Highway is also a mess of broken parts. Playing through the stage often has Shadow compensating for the Highway's structural impossibilities. Many of its parts just don't connect, and its roads are barricaded with police cars, permeated with G.U.N Mechas, blocked with metal Crates and is constantly receiving air bombings from G.U.N fighter jets. Radical Highway has less of a focus on infrastructure and more on the presence of the G.U.N military organization. But both of these give a lens to the deteriorating state of Central City, a place that seems to be literally falling apart in front of our eyes, and the eyes of Shadow and Tails. 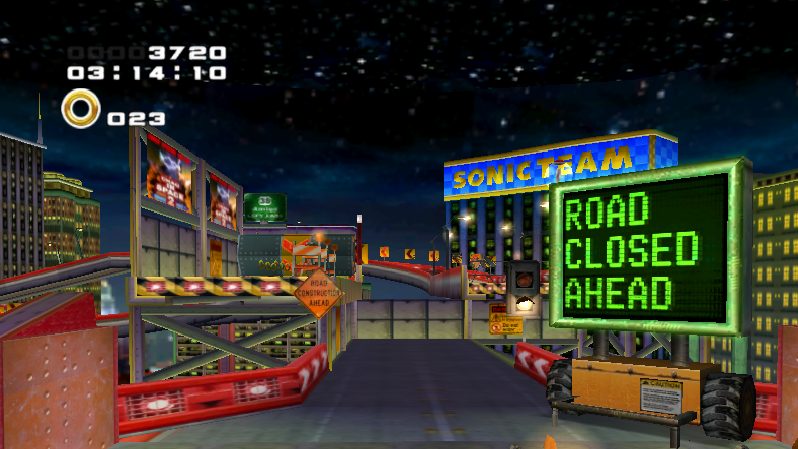 So if we conjecture that this isn't really Central City but rather an "expressionized" perspective, then these stages are giving a vivid and intense portait of the city's worsening situation. It's a place that's becoming increasingly incoherent, unnavigable, dangerous, and of course, "falling apart," aging rapidly and therefore less able to sustain its structures. It's also a city that seems to be suffocating under military interventionism. There are very clear lines drawn between the presence of G.U.N and the increasing hostility of the city. In Radical Highway, the presence of G.U.N puts the city's highways under total arrest.

Sonic Adventure 2 makes numerous implicit criticisms of G.U.N by showing the toll its taken on Central City, and it's pretty easy to see the game as critical of military culture and secrecy. From my account, Eggman isn't really the cause as much as he is the trigger of what always was an old and toxic political stucture. SA2's frequent motif is the uncovering of Old Things. Old structures, old projects and plans, old technology, and old ideals, rising to the surface in an undead state, trying to make themselves realized. From that point, Sonic Adventure 2 starts to make a lot more sense. It's a game that tasks us with making sense of structures that are in collapse. Of navigating the perils and pitfalls of oldness.

It's really important to recognize the way that certain Sonic game stages, Windy Valley, Radical Highway and Route 101/280, Rail Canyon and Frog Forest, isolate settings in floating space. These places never seem to actually touch the ground. Instead, they lie static and suspended, becoming objects in themselves that are slightly contextualized by the skybox. Radical Highway's spacial isolation allows it to become its own visual essay; a representation of social/material decay under extreme statist militarism. This is something not even the German Expressionists could do. They painted before the modernist abstractionists, abstract expressionists, the color field painters, the Fontanas and Olitskis who would question and complicate what it means for a painting to be bordered. If you were an artist in 1914, it seems that you were bound by the edge, but in 2014, there is no edge!! There is only be a here and a there, an object in space and its context.

Another thing worth noting is that if we take this premise, then unlike pre-war Berlin, we'll never actually know what Central City looks like. What makes fictional settings weird is that what we see is what we get, there is no "real" Central City to compare this expressionized Central City to. So abstration is a freakish tool that creates a flow for powerful ideas but also hides so much from us. We have all these ideas, and yet there's so much space, maybe too much space, for our minds to wander.

1: Quoted from Norbert Wolf's "Expressionism," which you can buy here. It's very good!

The blog of Zolani S